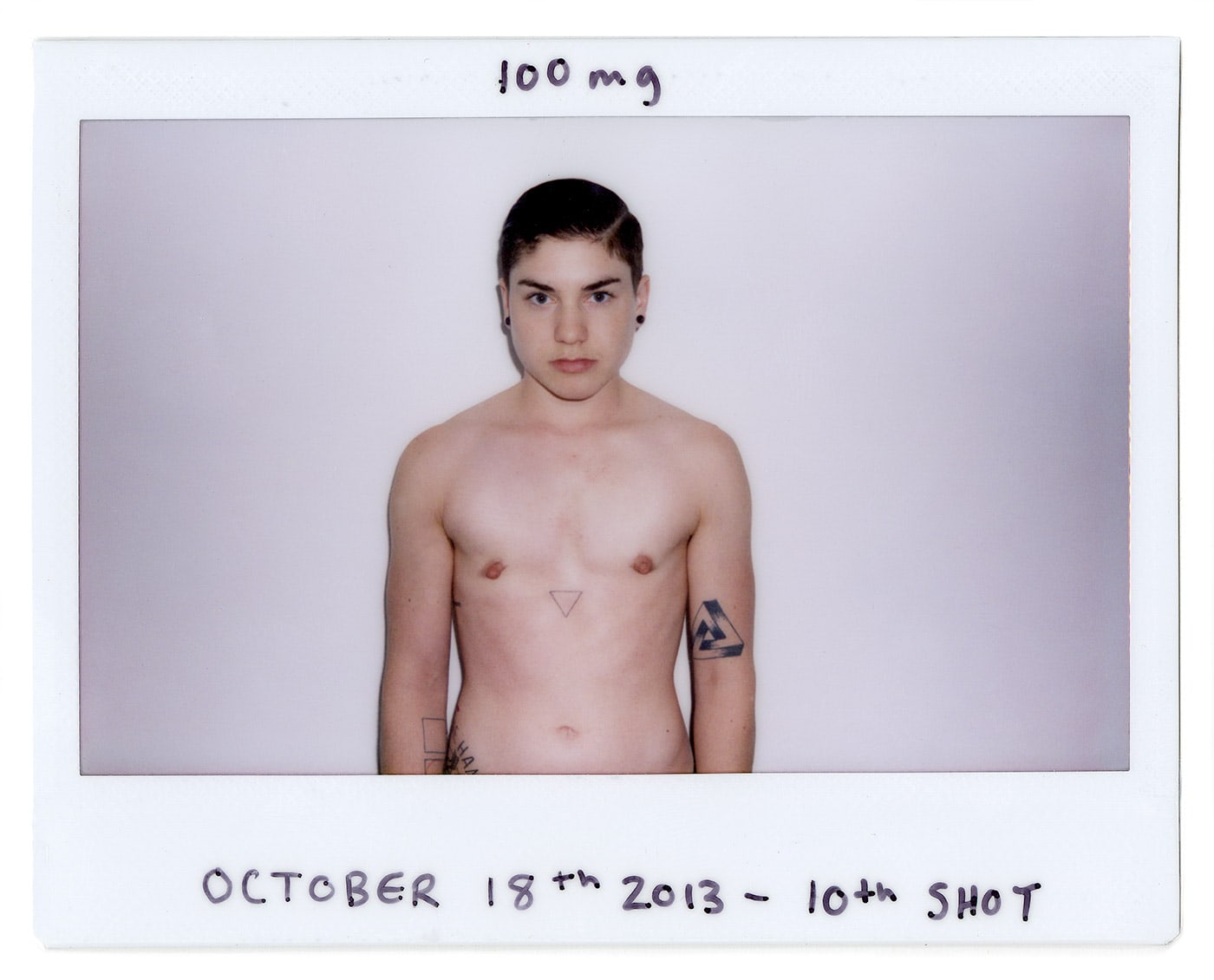 A trans-identified queer visual artist, Wynne Neilly is constantly thinking about how his personal experiences and environments can be rendered visible to a larger audience through art.

Hence, when he began his transition from female to “male” several years ago, he purchased a cheap instant camera and asked friends to take his portrait every Friday. On the print, he recorded the amount of testosterone he had taken. Each shows a version of himself that was only temporary, highlighting the transient nature of his journey. He also recorded vocal modulations, and kept documents and objects such as prescriptions, vials, needles and post-it reminders. These, he says, offer “an intimate view into the physical, psychological, medical and financial changes he has undergone to shape and explore his gender.” 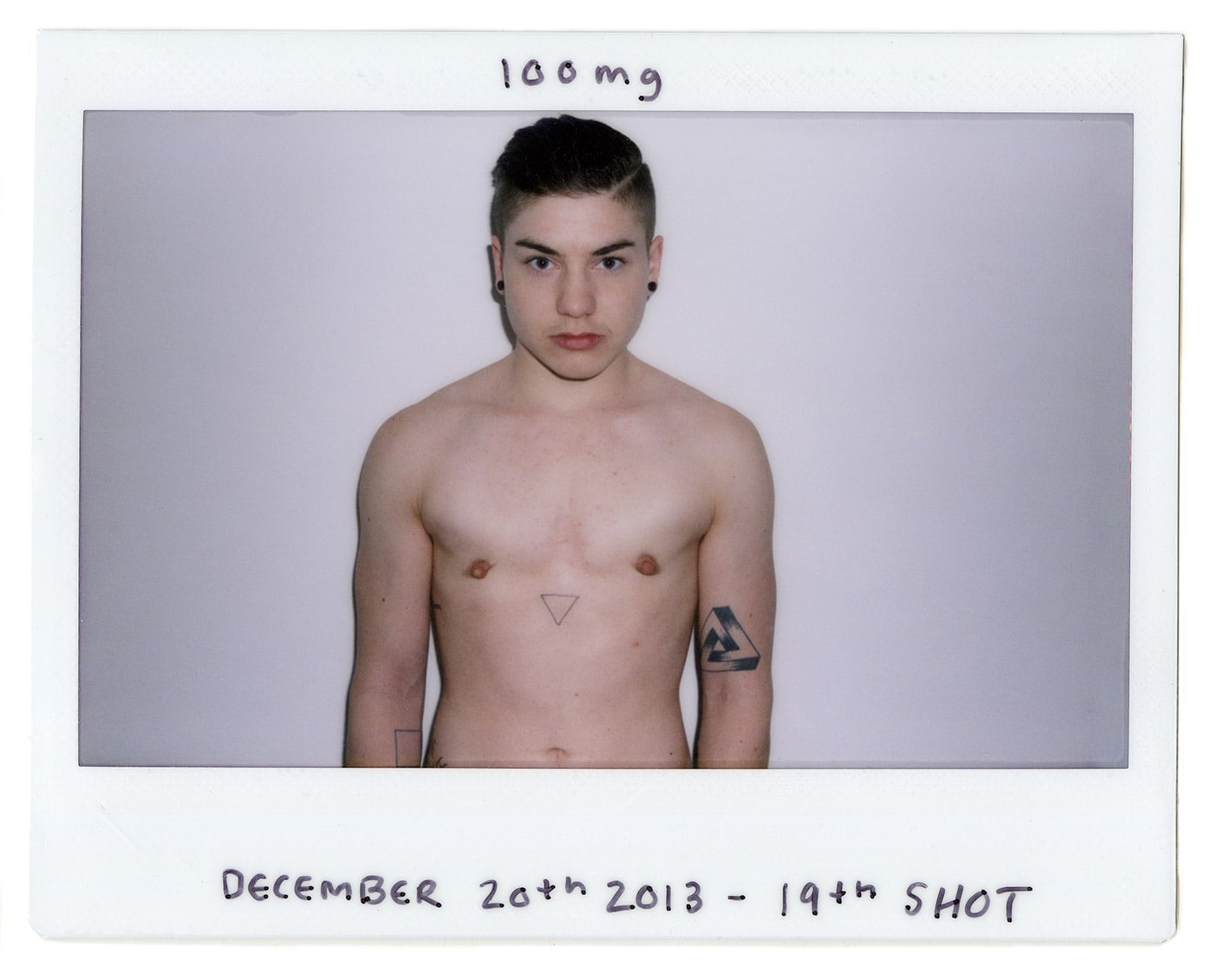 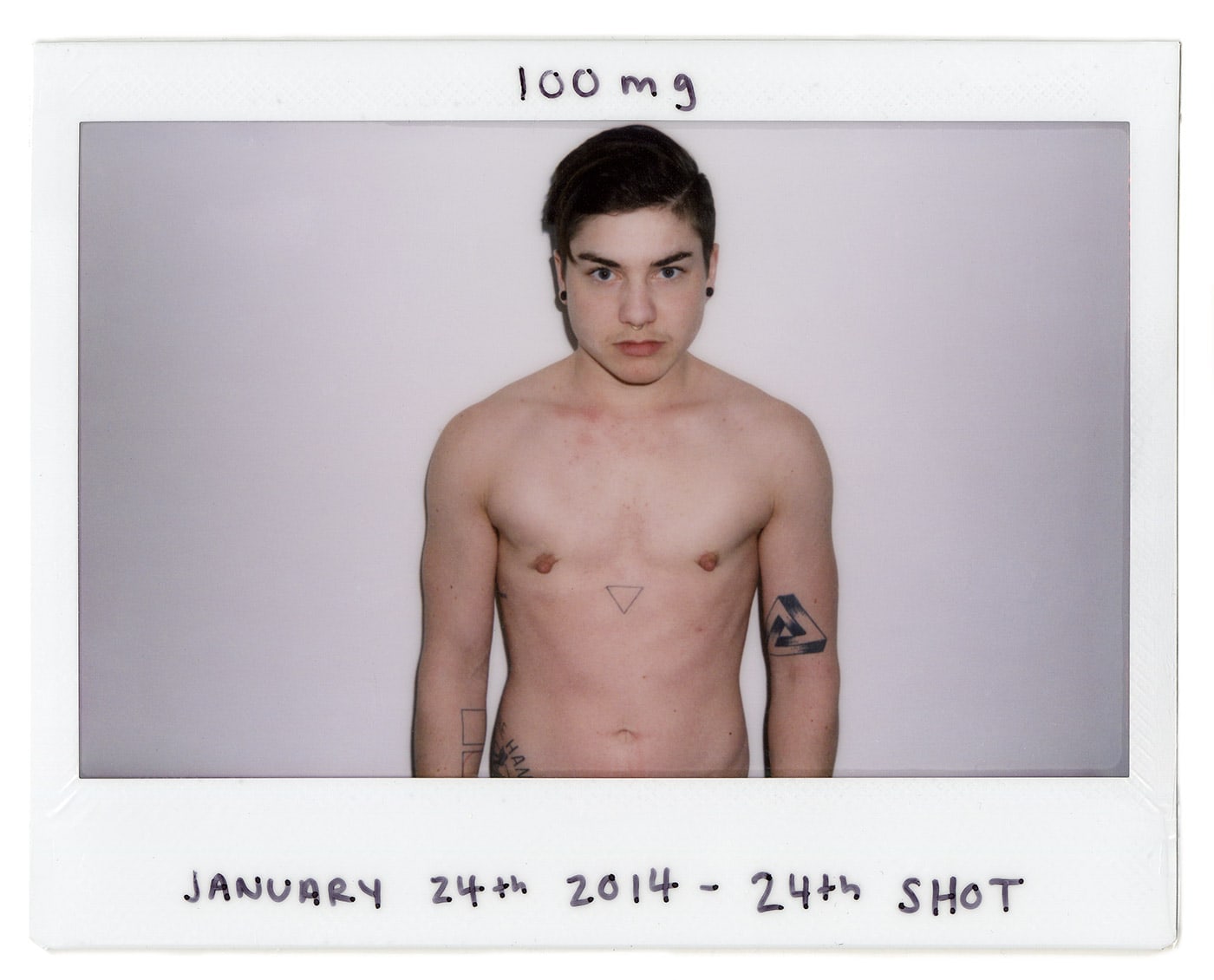 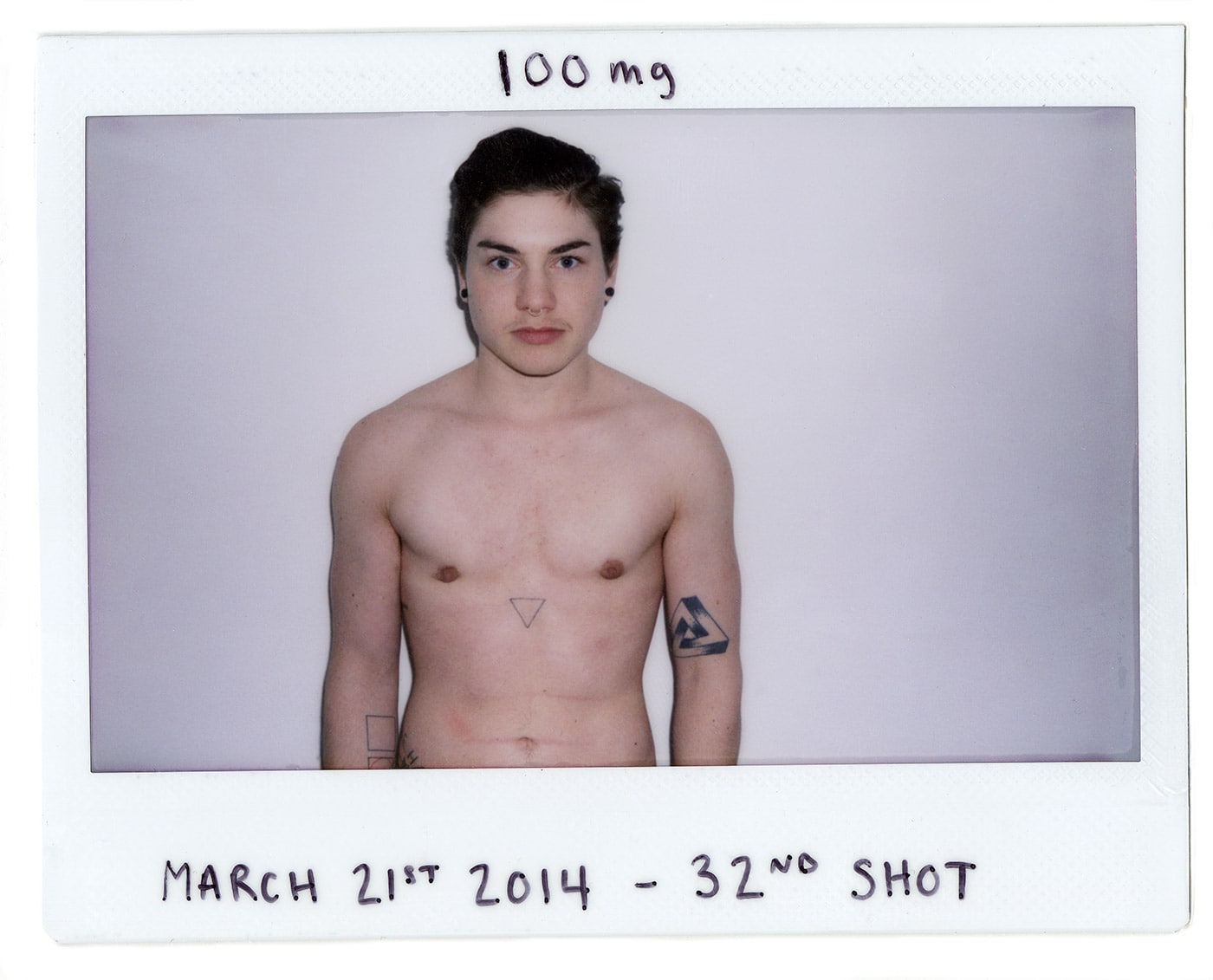 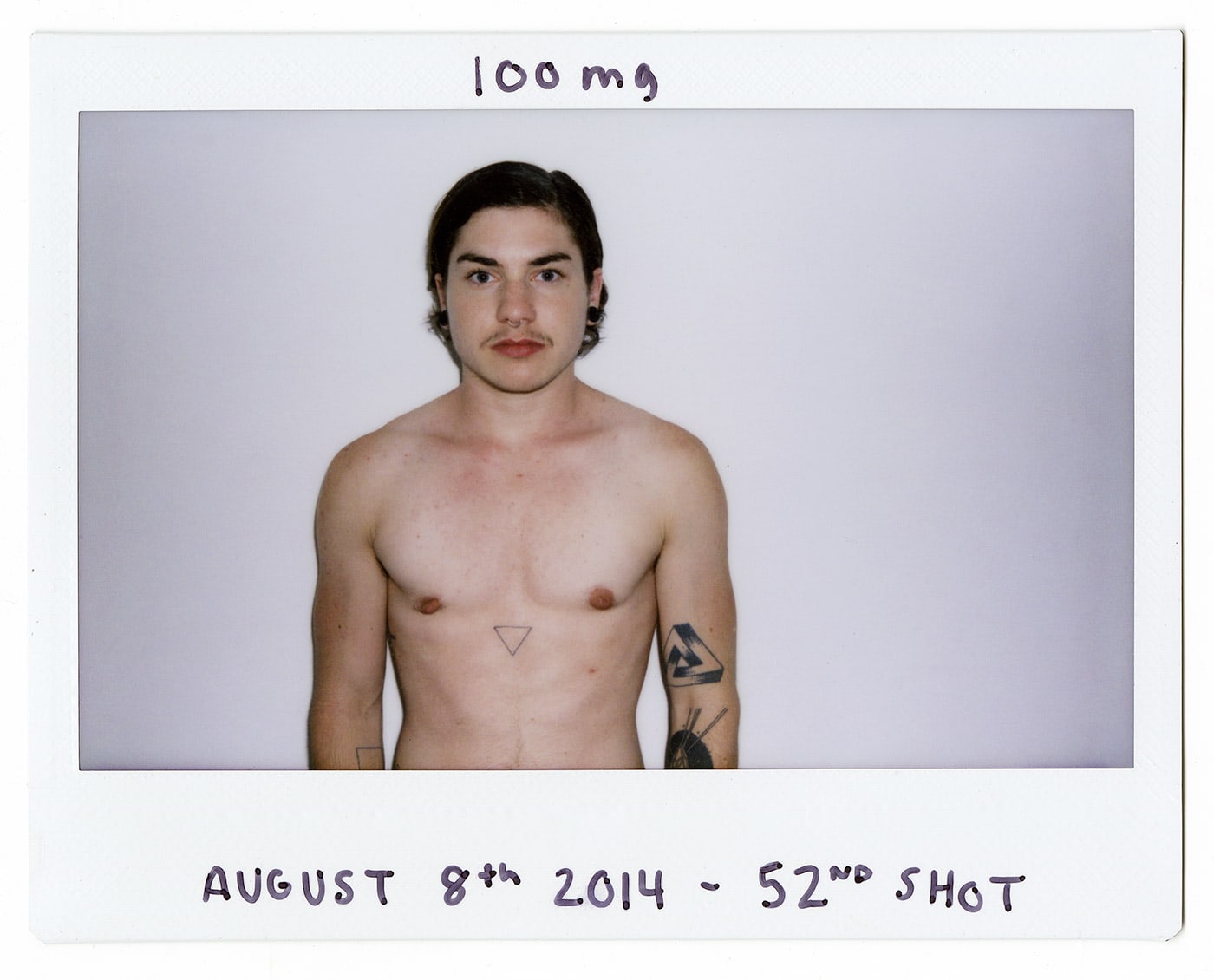 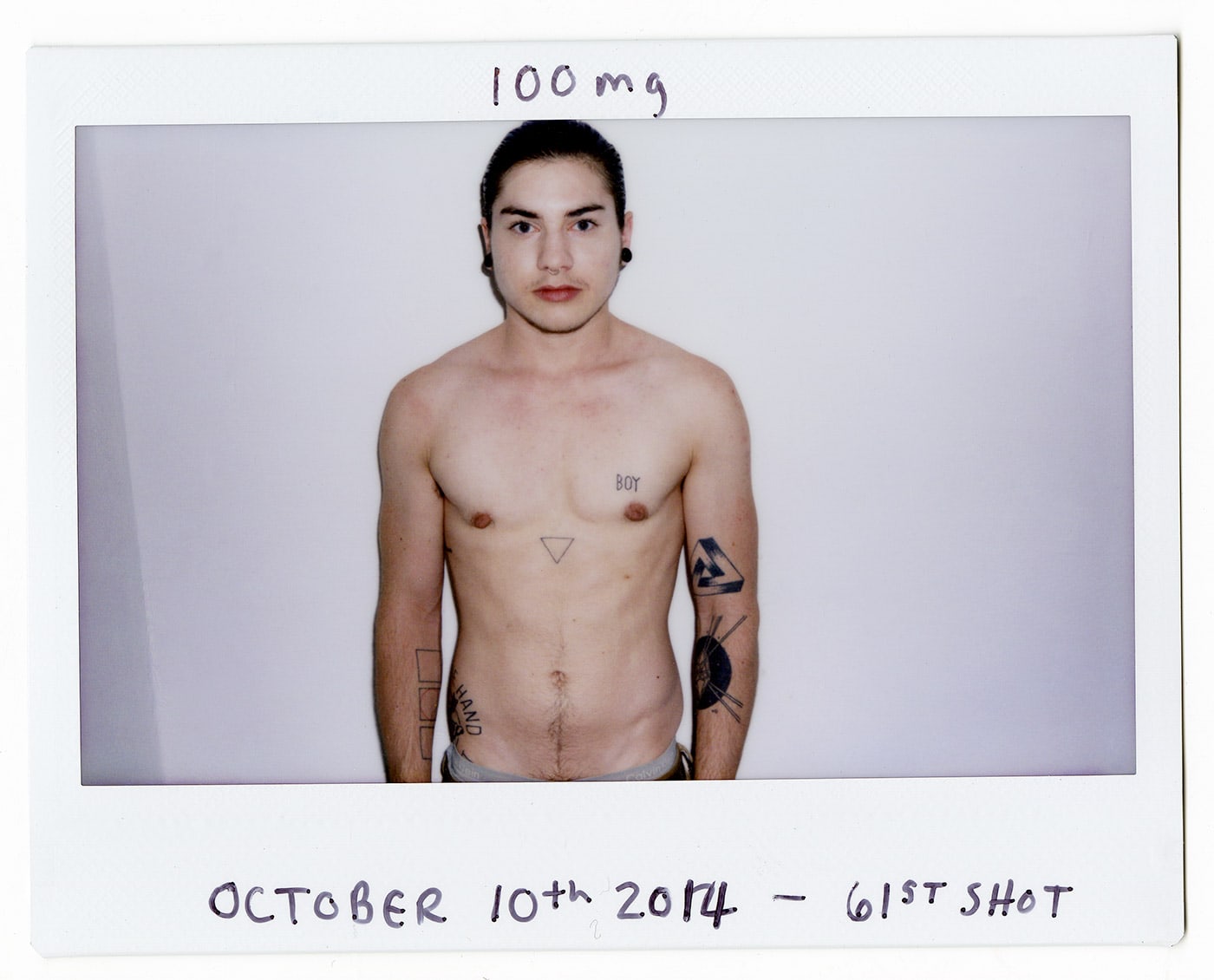 How can photography expand our understanding of existing identities? What responsibilities do we have when working on these projects?

In Canada, much of the trans-related surgeries remain unattainable for many individuals, mainly because of the intense bureaucratic process, the lack of financial support and the dearth of medical specialists. Up until March of last year, only specialists at the Centre for Addiction and Mental Health (CAMH) in Toronto could approve sex-reassignment surgeries. The wait-time for the assessment often took 30 months, which is considerable considering the emotional toll of being at odds with one’s body. The Ontario government has agreed to enable qualified health-care workers anywhere in the province to conduct the evaluation based on criteria from the World Professional Association for Transgender Health (WPATH). These include a persistent, well-documented diagnosis of gender dysphoria, that any mental or physical health concerns be controlled and, in some cases, that the patient take hormones and live as their desired gender for a year. The ultimate result of the new policy was to cut wait-times by 10 months.

But even then, finding a doctor to perform the operation is nearly impossible. In June of last year, the Women’s College Hospital announced that it would start offering genital reconstruction services, becoming the second institution in the country to do so. Prior to that, only a private clinic in Montreal offered vaginoplasties and phalloplasties. Even hormone therapy requires a similar strenuous process if one can’t afford their costs, which can reach $500 per month.

If Neilly shared his experience publicly, it is largely in part to educate. Misconceptions surrounding trans individuals are numerous, especially given the prevalent binary understanding of gender and our tendency to treat groups as monoliths. He’s quick to point out that his experience is his own, and, as such, does not reflect all trans experiences. He always use the word “male” in quotation marks to demonstrate that “his identity is something fluid that cannot be easily defined by use of a single word. For him, his gender and body are a construction of the ways in which he perceives himself and the queer social experiences he has lived. His trans identity is not a shift from one sex or gender to another, but rather a continual evolution.” 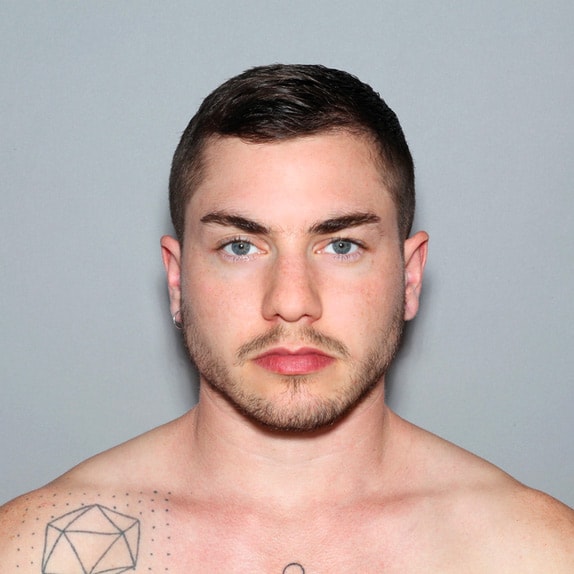 Wynne Neilly is a Toronto-based, queer-identified, visual artist and award-winning photographer. Upon completion of a BFA in Image Arts at Ryerson University, he has directed his focus on producing and showcasing work in gallery spaces internationally. It is important for Neilly to continue sharing his experiences and images around the world through online mediums and physical installations. He focuses on portraiture and editorial work, using its personal nature to reflect the development of identity and the complexities of human gender expression. His work seeks to normalize the queer and trans body.