LBR. How did all the different elements (using the negative of the photograph, the red dot and optical illusions, etc) from Variation of White come together to confront our ideas about photography and perception?

MA. Usually, after finding a subject my working process starts with research and development of a concept. In the case of Variation of White the idea of applying the optical illusion trick, the negative after image, to photographs of people with albinism came very spontaneously. The work is primarily about the subjectivity of the gaze, preconceptions and perception. Those topics are mediated through the protagonists of the series who are persons with albinism in Tanzania. They are facing harsh discrimination and violence because of the myths surrounding their appearance. I usually exhibit the photographs together with a documentary film Miss Albino, which is about a beauty competition for young women with albinism. Voices of the protagonists from the series and their concerns can be heard in the film. 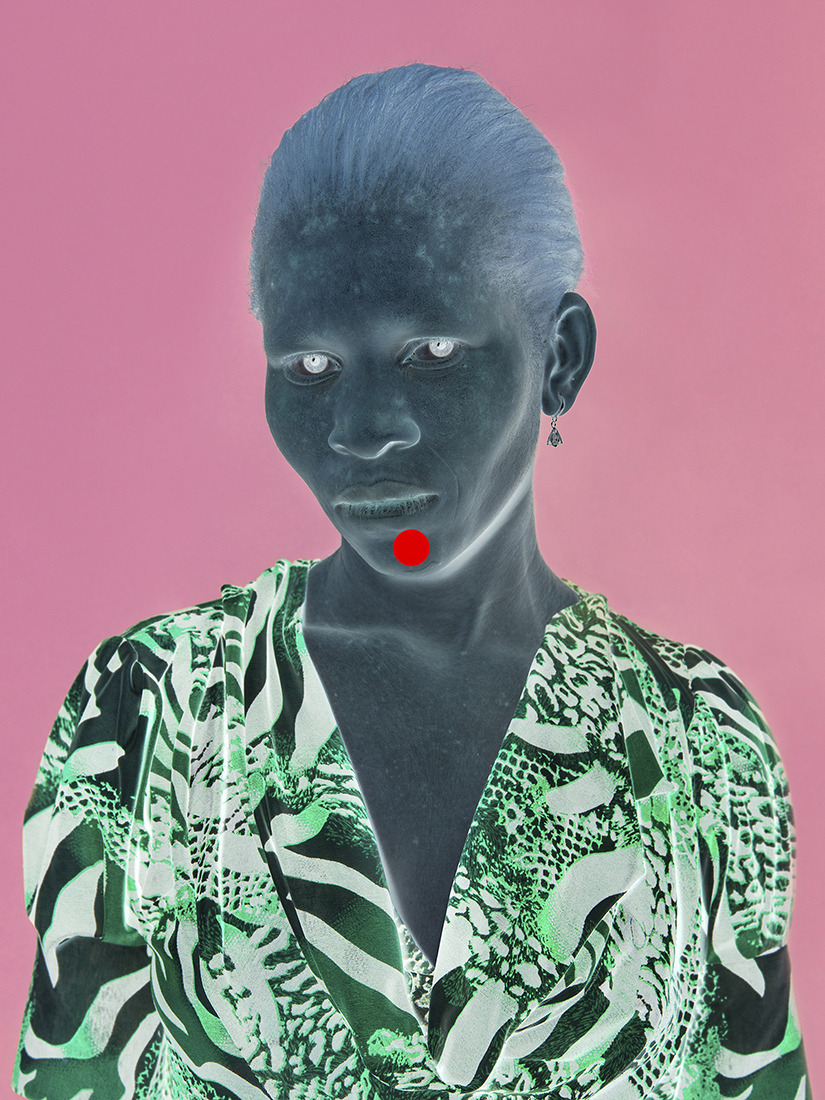 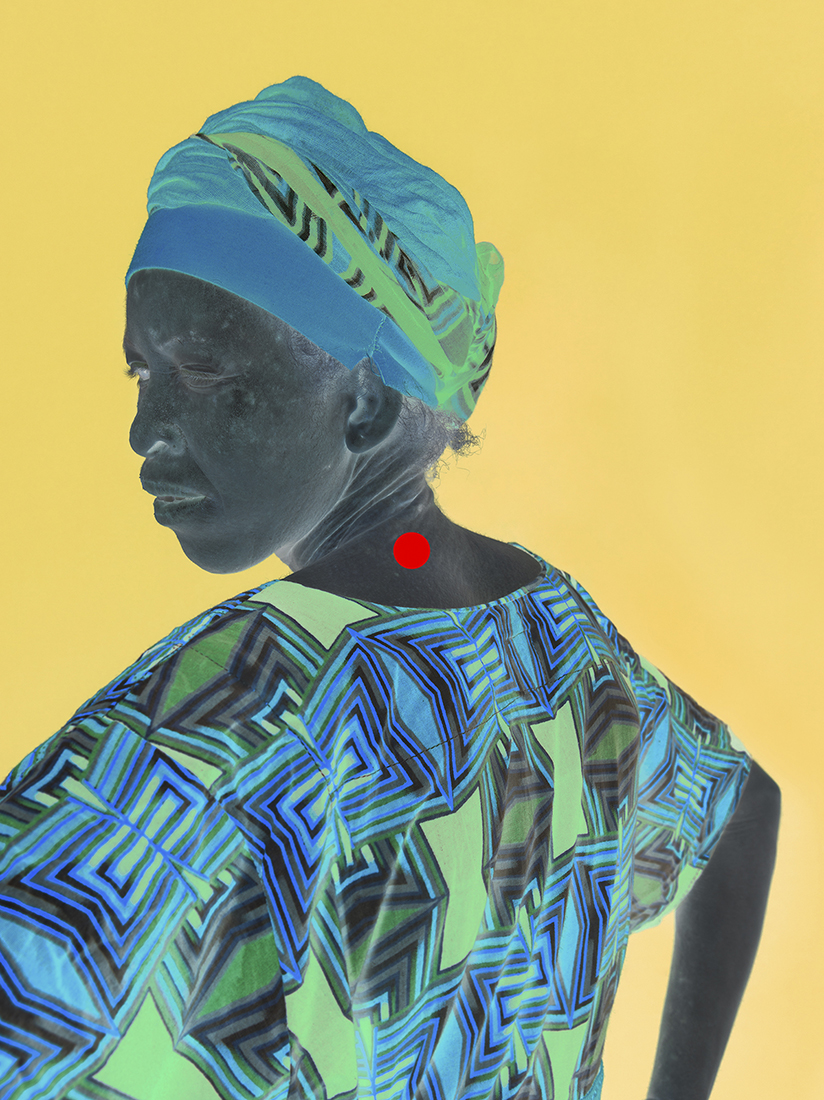 LBR. Why was it important for you to take on that subject matter in a more conceptual way than most documentary photographers?

MA. The greatest task of a photographer is to make ordinary consumers of images understand what photography actually is. Documentary photography has the burden of being seen as a reproduction of reality or truth. Some subgenres within that realm are not even concerned with reconsidering this impression. For example, photojournalism is more concerned with digital altering than questions about the photographer’s intentions or the viewers’ responses. People tend to take most of what they see for granted. In my images, this is turned upside down. I wanted to question the relation between photography and reality in a very tangible way. There were already so many photographs of people with albinism, that I didn’t feel like reproducing the same imagery again even though my aims are very much the same as other more traditional photographers. The conceptual approach just allowed me to go much deeper into the background of the topic and at the same time impact the viewer more. 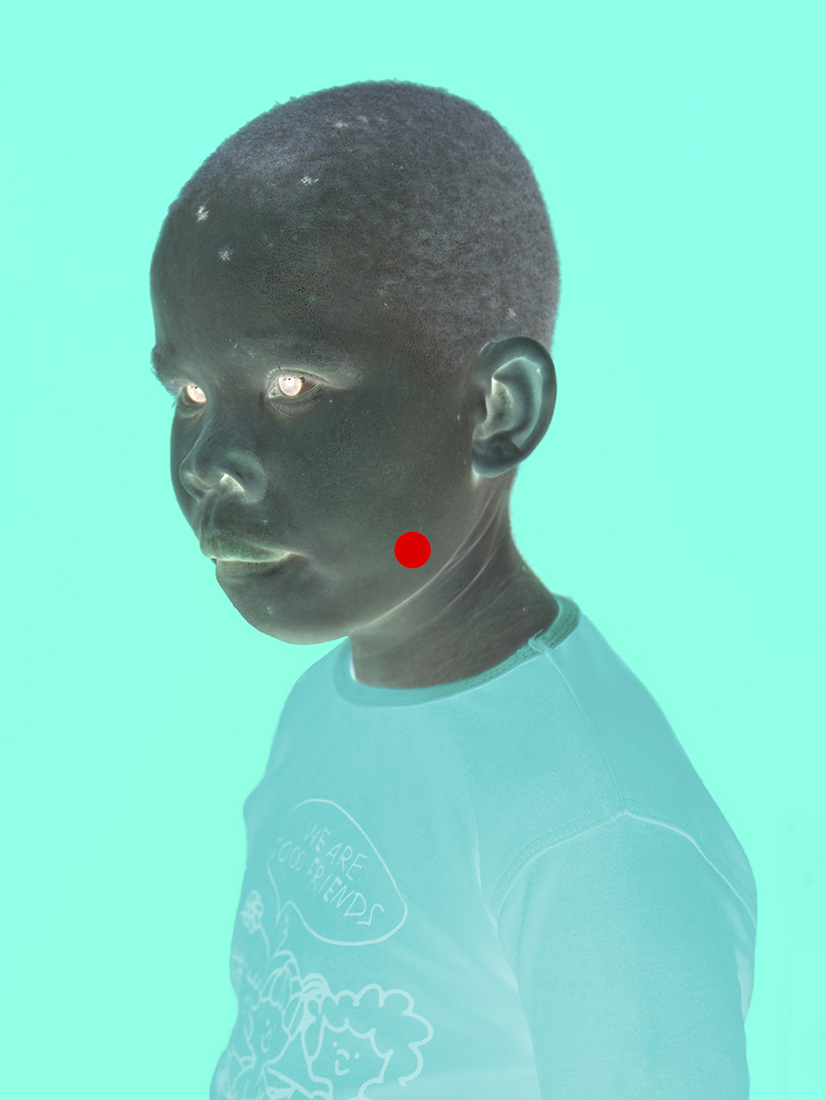 LBR. How has the process between Variation of White shaped the way you approach and produce new work?

MA. I have always been fascinated by the very essence of the photographic medium but lately it has started to bother me a lot. We are reaching a point where we have to reconsider all forms of possession and this also regards photography. I am questioning my position as a photographer: whether I need to take pictures of other people, animals or nature and if I do, what are my motivations and what do I create with the images. At the moment I am trying to find a personal answer to those questions.

Miia Autio (born 1986 in Reisjärvi, Finland) is a visual artist living and working in Helsinki, Finland. She holds BA in photography from University of Applied Sciences Lahti and from Fachhochschule Bielefeld. She is currently an MFA student at the Academy of Fine Arts in Helsinki. Her work has been shown in various exhibitions and at festivals internationally including Kunst Haus Wien, Vienna (2019), the Hasselblad Center, Gothenburg (2019), Finnish Museum of Photography, Helsinki (2018) and Deichtorhallen Haus der Fotographie, Hamburg (2017).