In conversation with Simon Roberts

A glimpse through British photographer, Simon Roberts news section is dizzying. His work is on view at Side Gallery in Newcastle, UK, at the National Maritime Museum in London. It was also featured in the past few months at Cortona on the Move, PhotoLondon, AIPAD, to name but a few. And a new monograph, "Merrie Albion – Landscapes Studies of a Small Island," was published at the end of 2017. How does he do it? Self-reflection, balance and patience.

LBR. If one follows your career, it seems like you have a lot going on at the moment. What’s occupying your time these days?

SR. Actually, I’m currently in a strange position. I’ve recently wrapped up a large body of work, Merrie Albion– Landscape Studies of a Small island. The book, published by Dewi Lewis Publishing came out in November 2017, and the work is now being exhibited, most recently in London and in New York at Flowers Gallery this Fall. I’m normally working on several projects at once; but Merrie Albion was so all-consuming, that when it ended, I was faced with the question: what next? I’m trying not to worry about it, and use this time to consider new directions and ideas.

Given the tumultuous political situation in Britain at the moment, I’m considering a new project around Brexit. I’m hoping to do something that differs from how I usually work. Merrie Albion was ten years of making a similar type of photograph, namely large format images from a high vantage point, each frame exploring how we use the landscape and how this can be seen as a form of expression of identity. Now, I feel released from that particular way of photographing. I’d like for this new project to be created in a more fluid way, to make it more of a collaboration, to include other forms of expression, for instance, using text and audio. 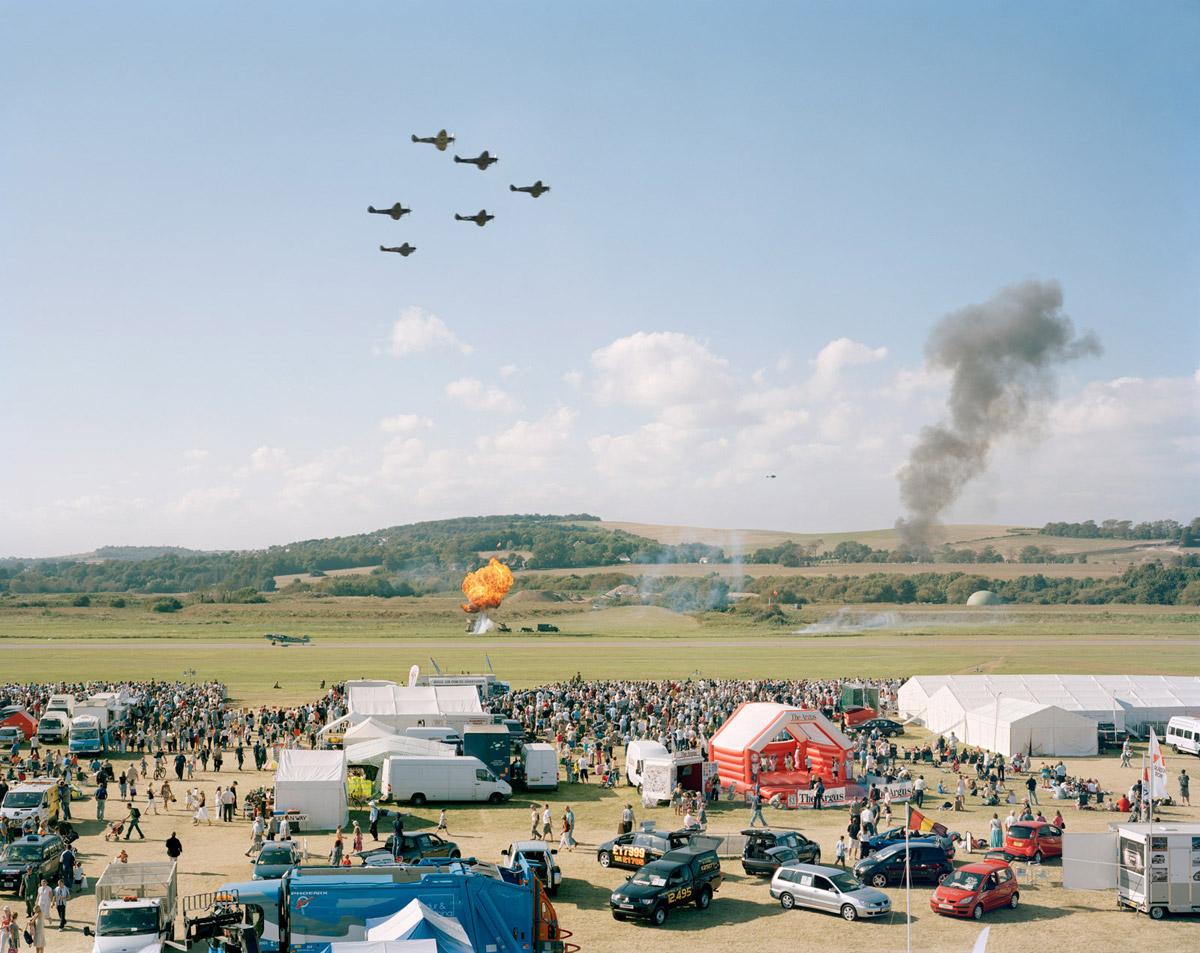 LBR. Since you’re in this moment of reflection, and, as you say, that generating ideas is the bread and butter of an artist, could you walk us through your thought-process when you’re in the early days of new body of work?

SR. For my Brexit project, it started with a conversation I had about a year ago with some academic staff at the University of Southampton who approached me wondering if I could make some work about their city. They were working on a particular project about the historic relationship Southampton has had with the sea. I realized that this could be an interesting starting point for a wider study of Britain’s future in terms of its relationship to Europe and the wider world. Now that I’ve made one small body of work I’m considering how to expand it, what other locations to include, other themes to broach. And, of course, looking for funding and cultural partners that can help with the logistics of not only making the work, but also showing it. If you don’t find means to distribute it, through exhibitions or books, it’s somewhat meaningless. I can’t make work simply because I want to. Economically, we need to be pragmatic about how we go about our practice. It’s that fine line between art and commerce. 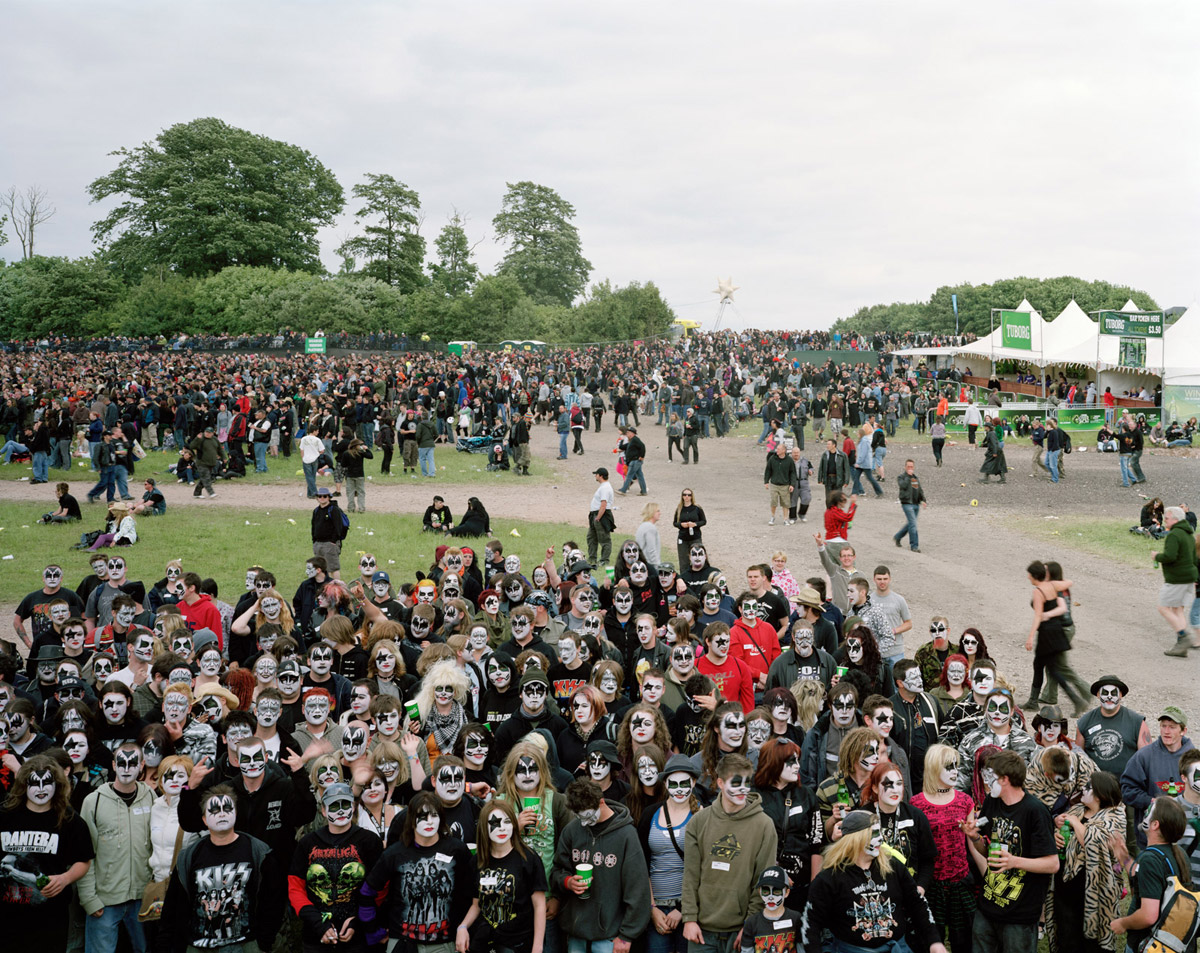 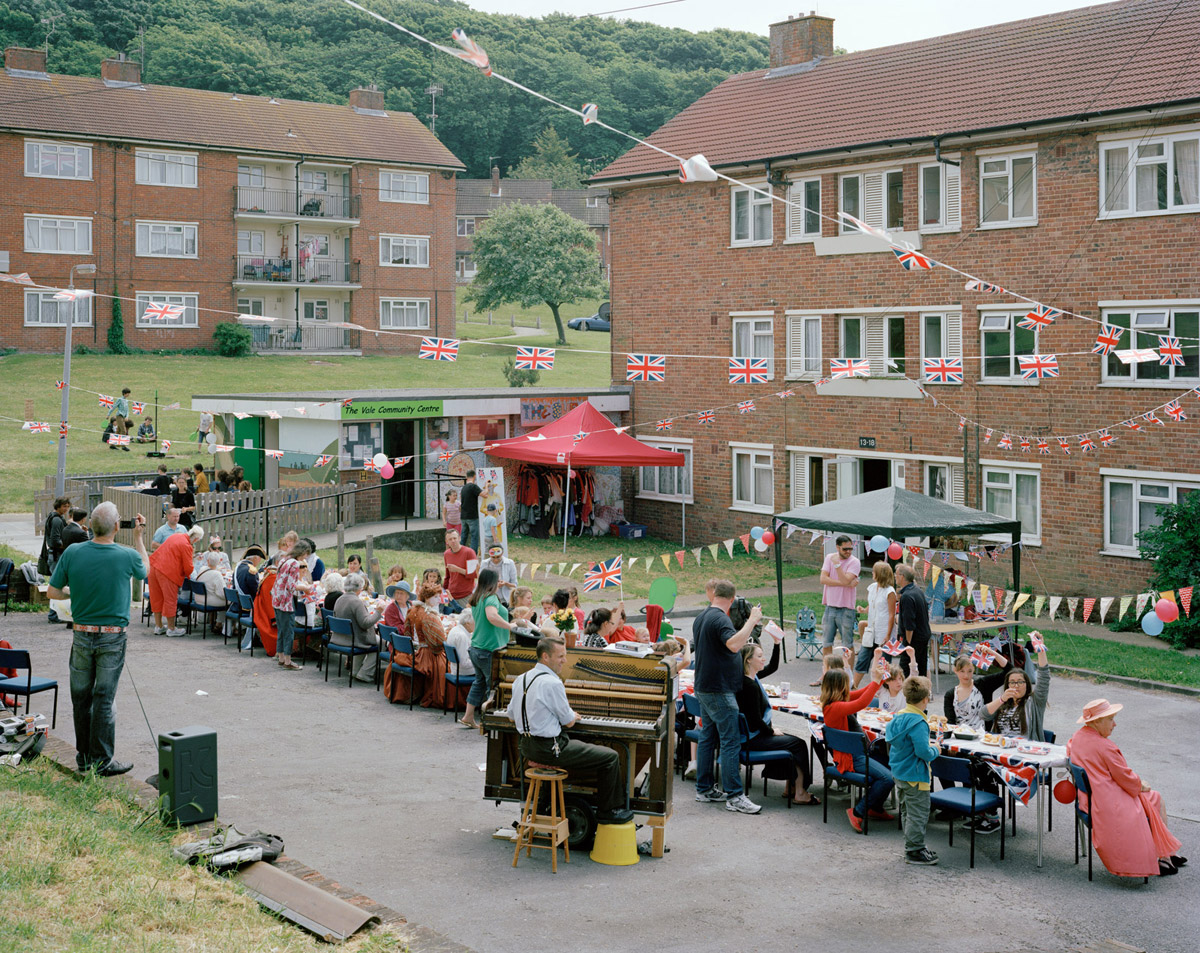 LBR. So much of your work is concerned with our relationship with geography and landscape and how those intersect with our sense of self and belonging, our culture, and our politics. What are some of the ways that you find geography impacts or reflects our society?

SR. I’m interested in how we use and interpret the landscape around us, especially in terms of where groups of people congregate for shared experiences. Landscape has always been closely tied to notions of national identity; one only needs to consider how certain artists and their patrons have represented it to shape our understanding of a particular place. In Britain, for instance, our national imagination has been influenced by the work (and its continued re-imagining), of John Constable, William Gilpin, Shakespeare, and so on. Even the British passport is full of bucolic scenes that exemplify an imagined sense of what Britain looks like, how we think about ourselves as the green and pleasant land…This is an idea I want to interrogate and explore the reality of these places. 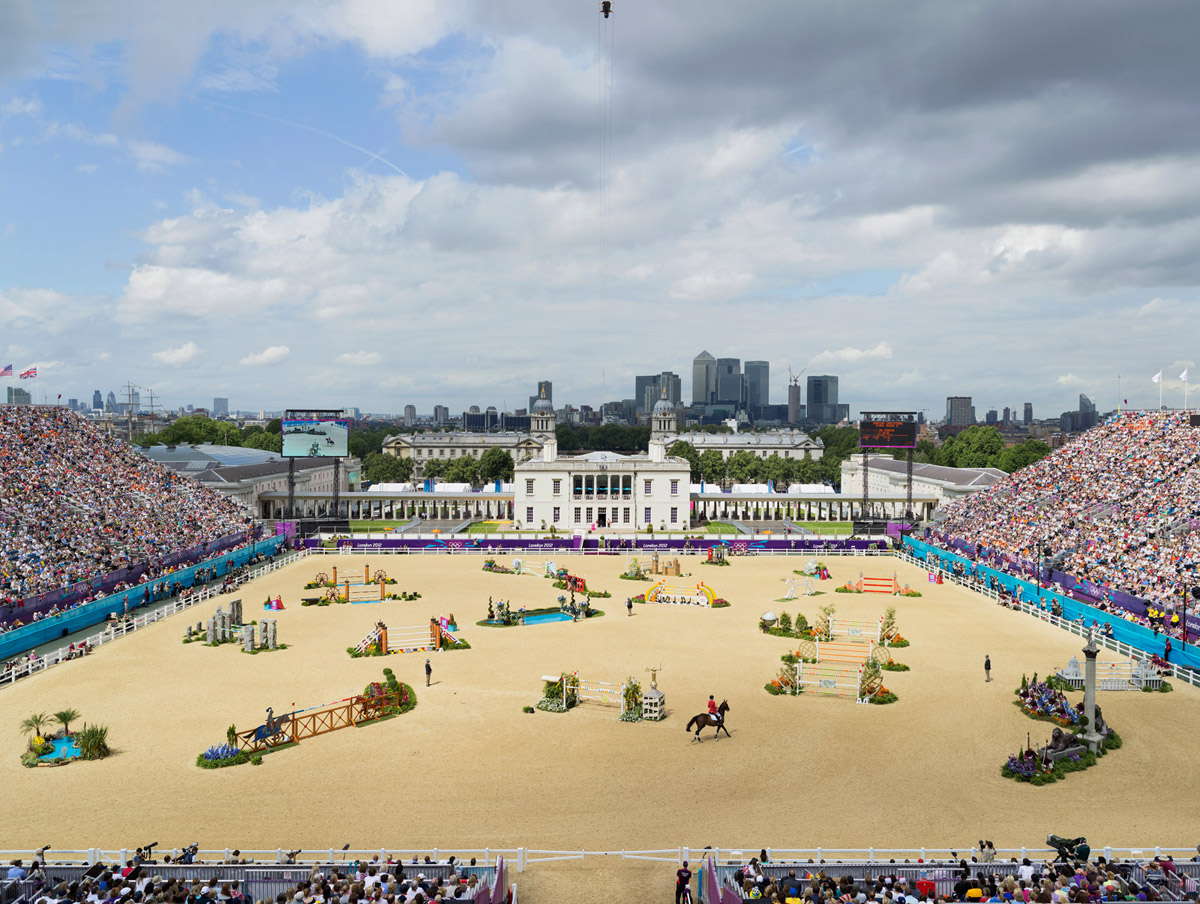 LBR. In that respect, what has working on Merrie Albion taught you?

SR. Over the 2007-2017 decade, we’ve been going through a period of soul-searching as a whole nation, especially since the regional sense of self is so important. I noticed how ideas of localism have become increasingly important as we try to forge a better sense of how we fit into conversations about community and sense of national identity.

Also, I noticed that while we’re in a period of isolation created by digital devices, I witnessed that there’s still much that brings people together, whether that be a sporting, music event or a political protest. There are still things we gravitate towards. What changes is how we look, how those things happen. You can see the scourge of health and safety in my picture through the number of people wearing yellow vests. And of course, the increasing amount of people with cell phones. Sure, how people interact has changed, but we still go out to look for nature, for respite; we still we congregate to get a sense of togetherness. 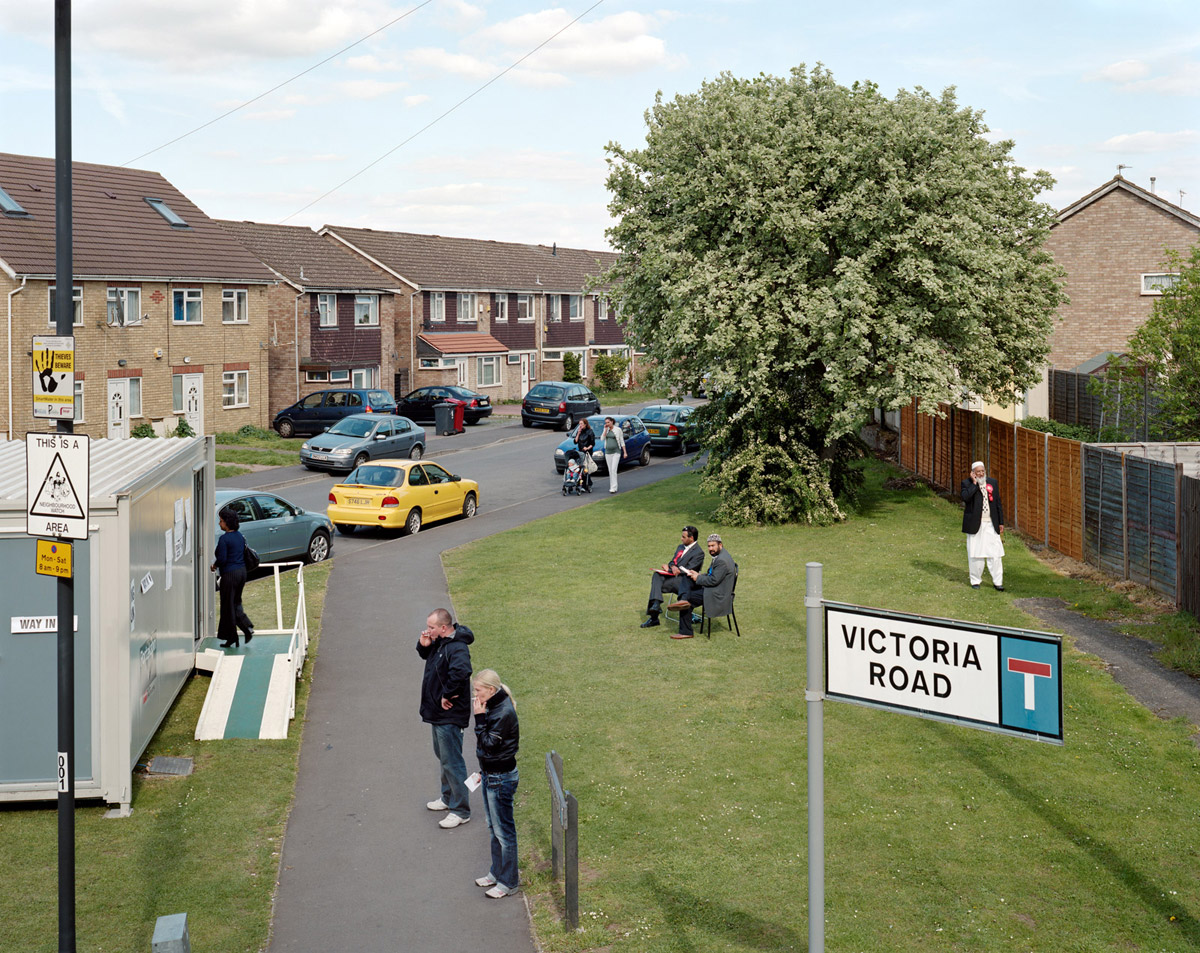 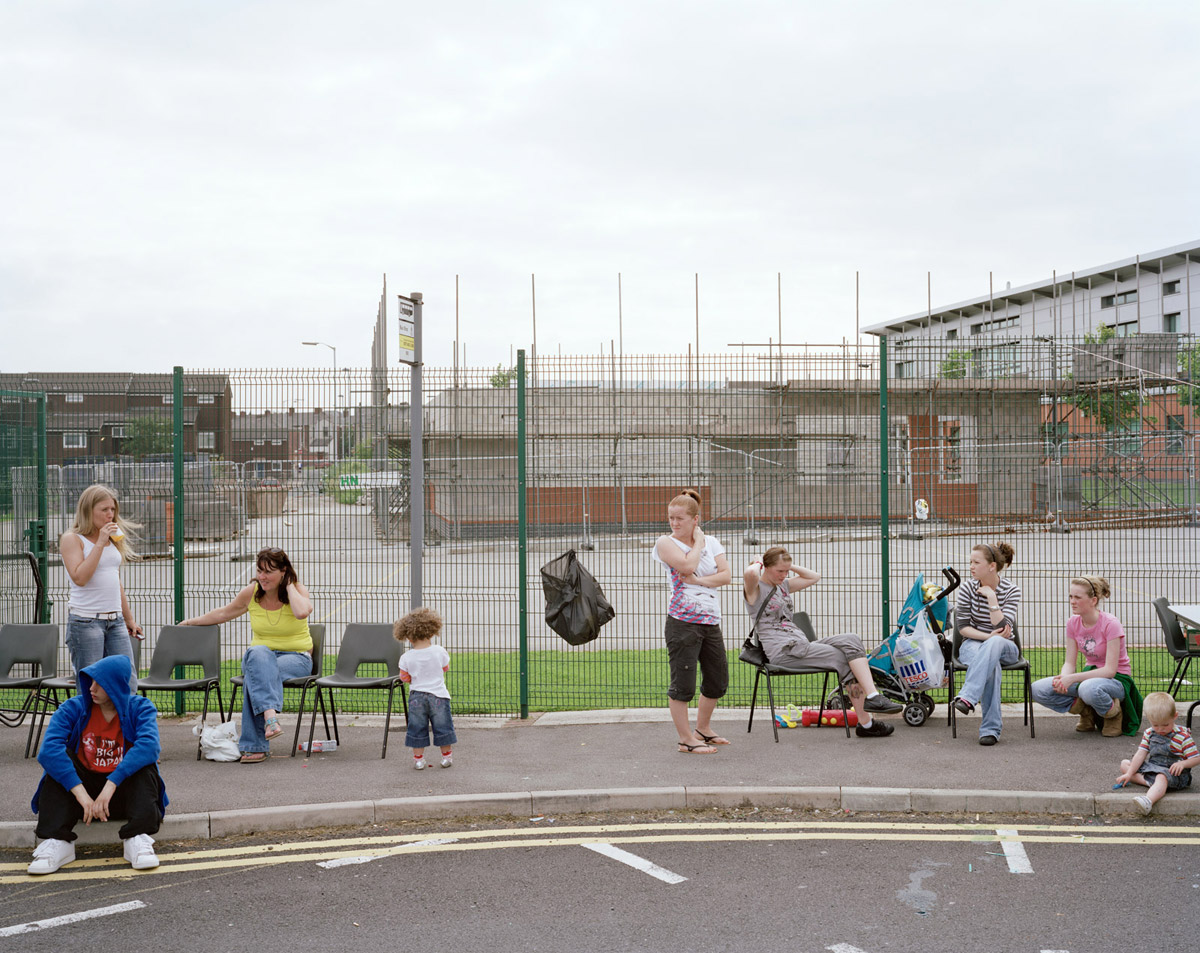 LBR. You’ve studied geography in university and yet you became a photographer. How did the two collide?

SR. My interests in high school were cultural geography and photography. Every subject has a geographic dimension and it crosses so many different fields: politics, the arts, economics, culture and so on. It’s not a defined area that takes you down one path. Before studying photography I decided I wanted to gain a wider academic grounding, which could be useful to frame my photographic practice. Studying cultural geography might also give me something to fall back on should the photography fail! 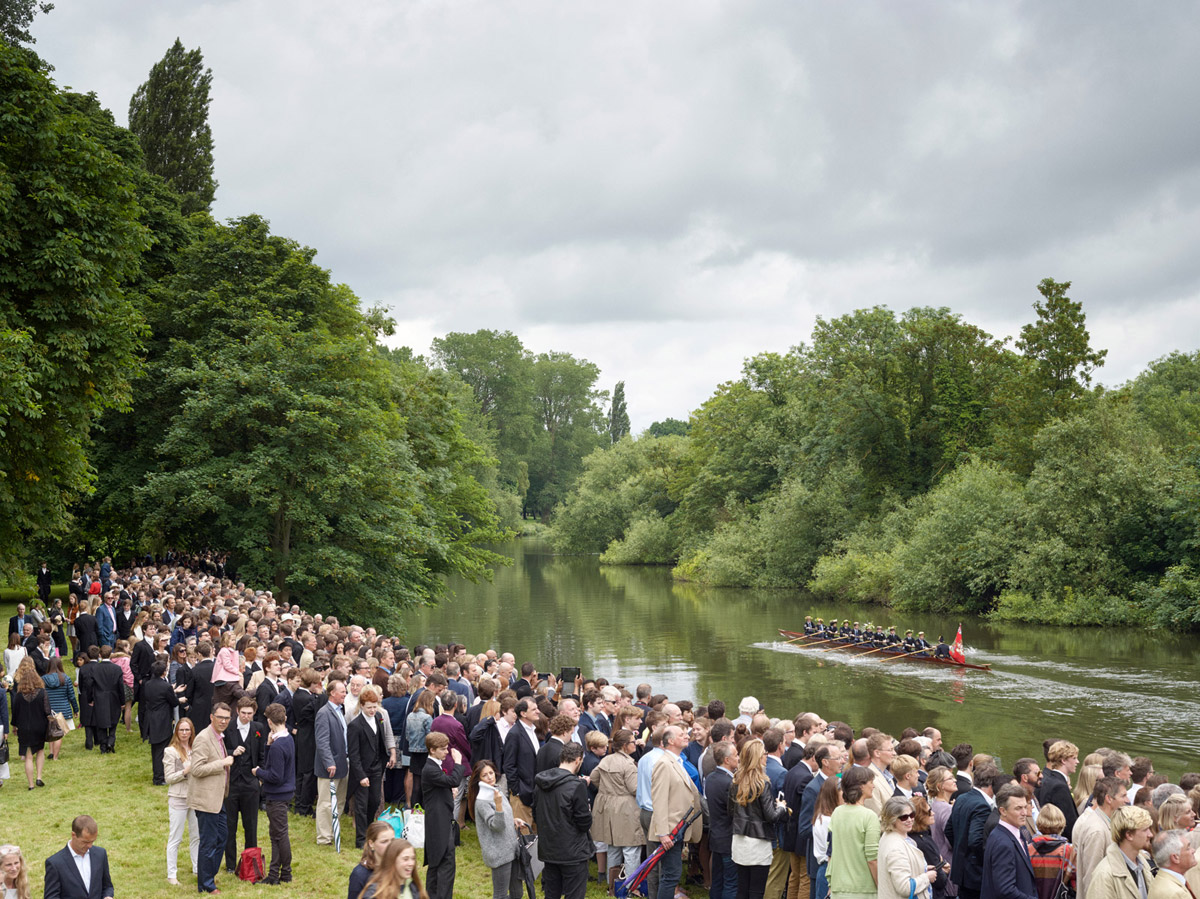 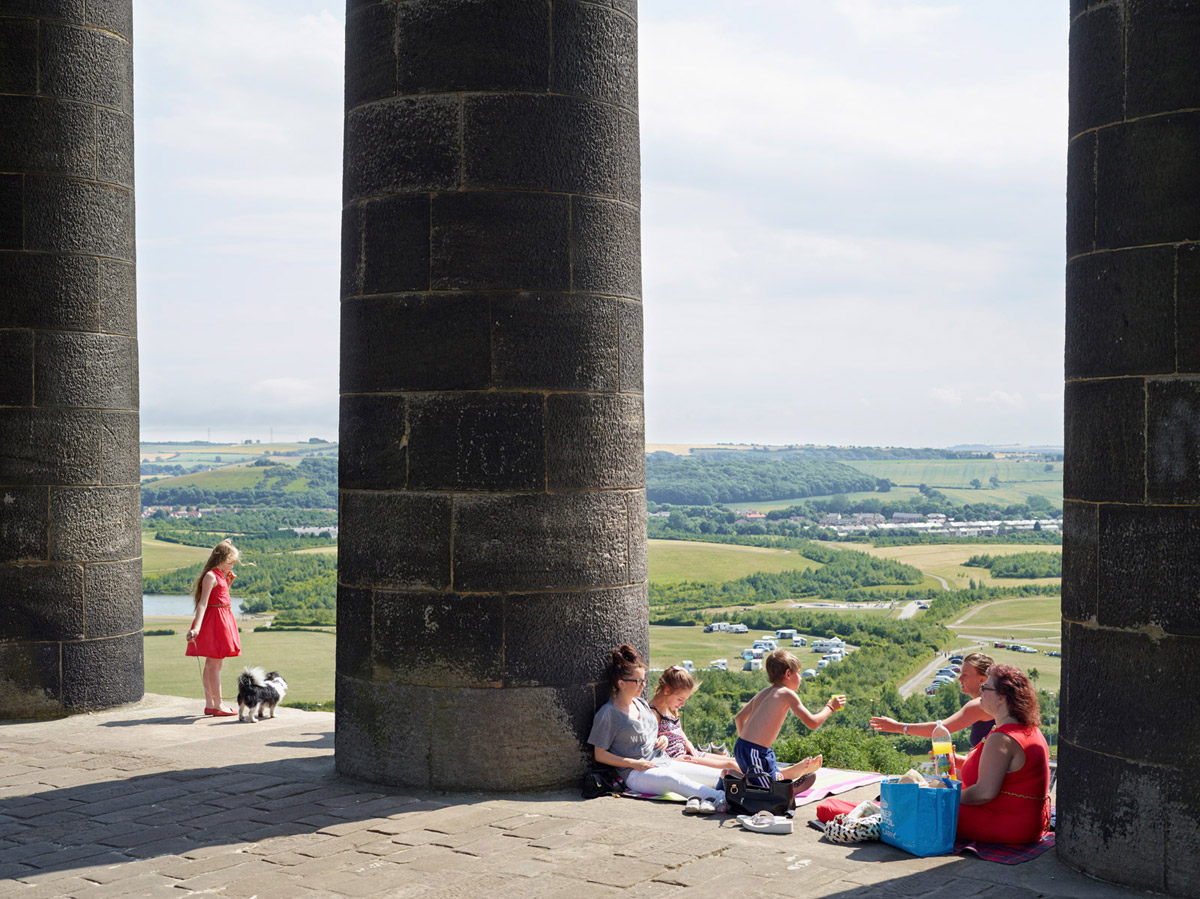 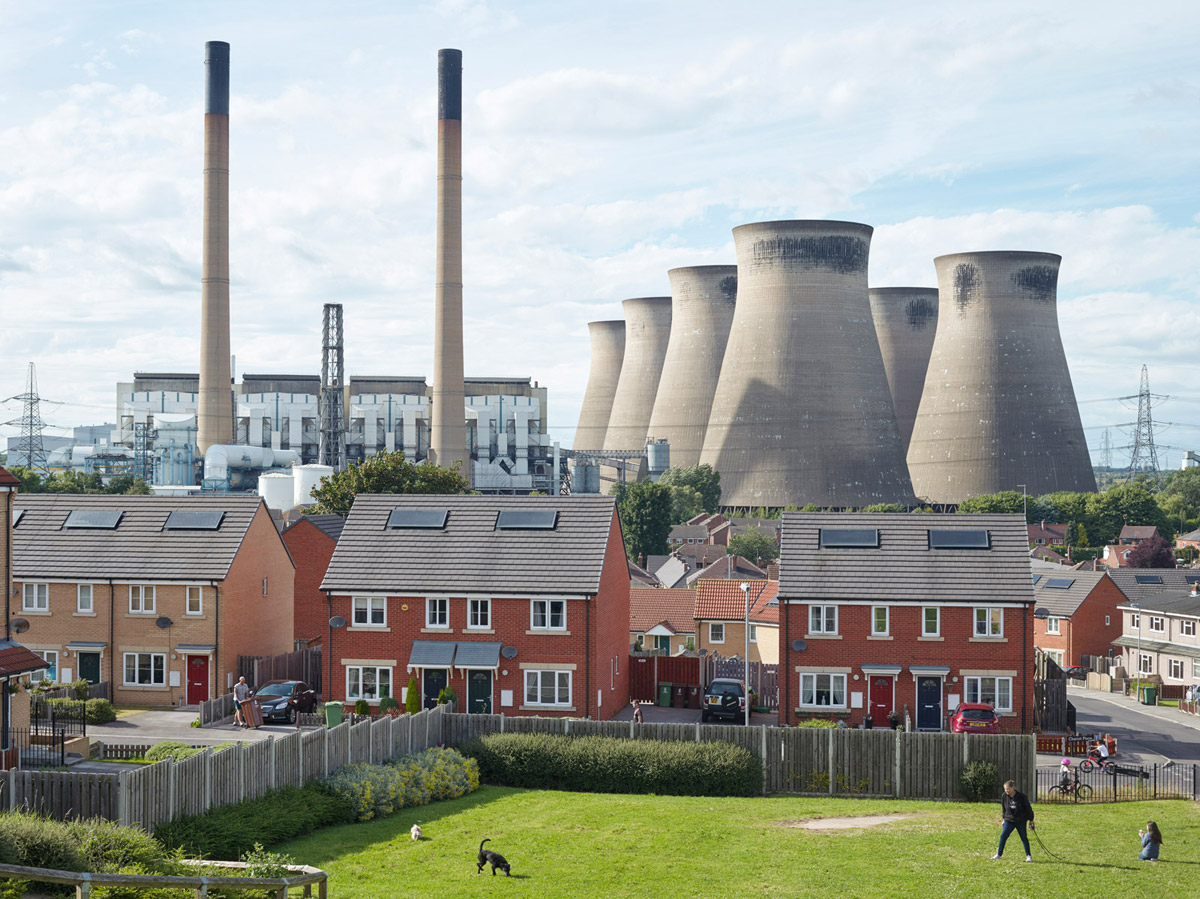 LBR. How do you find that photography can help render theoretical concepts more intelligible and concrete to a wide audience?

SR. In a way it relates to the difference between making a publication and an exhibition. Within a book I can take the viewer through a journey that I can’t through an exhibition. The way you relate to the photograph is different. In an exhibition the prints, due to their size, are all consuming, you enter into my landscapes and can discover many narratives. Within a book, I can add a more indepth textual element that can help a viewer read the photograph in a different way, providing more context if they so wish. It’s up to the viewer whether they access this information to gain a different understanding of what they’re looking that.

LBR. So it’s not about making a didactic document?

SR. No because some people are interested in the work because it inspires some sense of remembrance, nostalgia, maybe even humour. I just want to create a dense image that rewards the viewer the more they look at it. At a time when photography is distributed and consumed so fast, we must give the audience opportunities to engage deeply in the act of reading images. 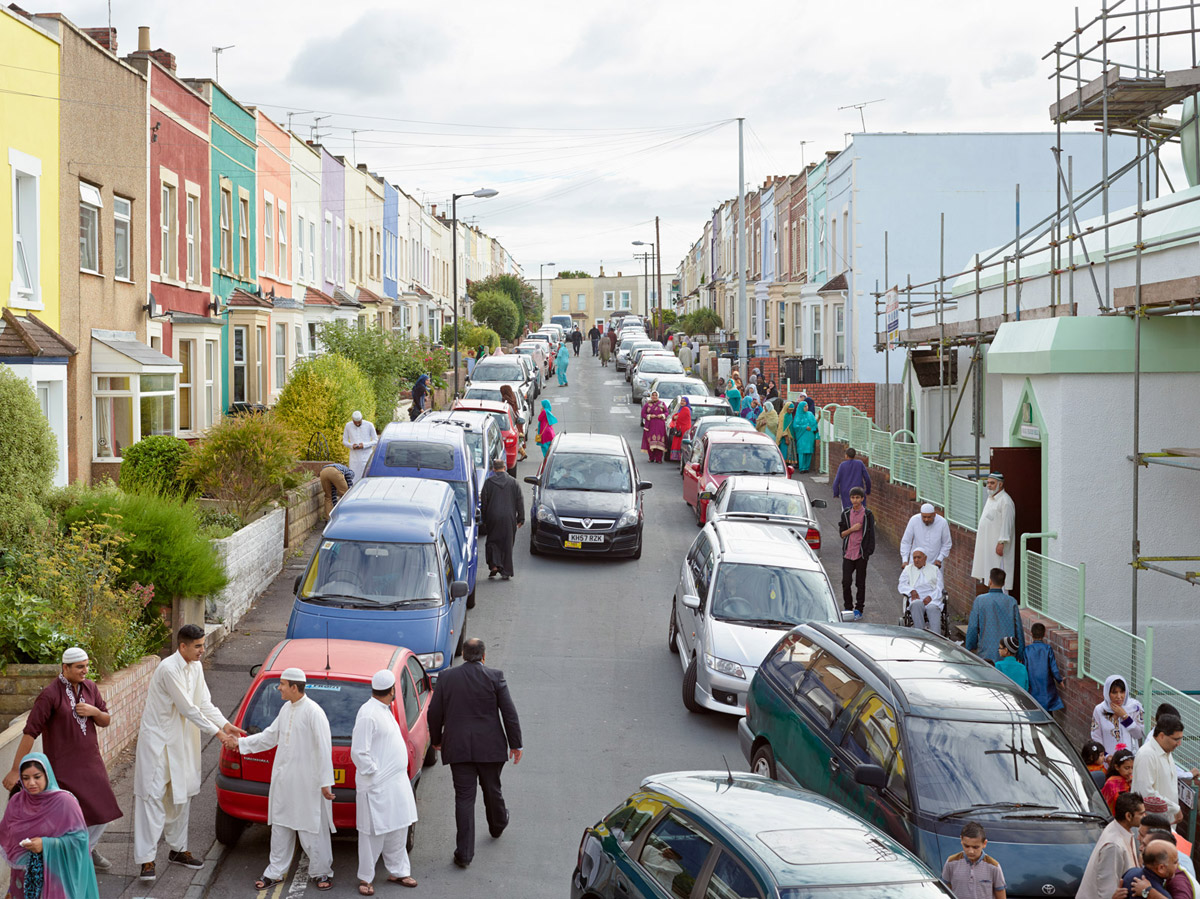 LBR. Speaking of the density, while there’s a lot going on in your photographs, they don’t feel chaotic. How do you achieve that balance?

I start by doing research about the place where’ I’ll be using Google Earth and Google Street View. This gives me a visual sense of it and ideas about what the best vantage points may be. Once I’m there, I wait for patterns to emerge in the landscape.

LBR. How has your practice evolved since Bright Spark 2006.

LBR. That was before Merrie Albion…

SR. That was before children! I was young and free… I didn’t have to worry about money and diapers! Joking aside, I’m much more rooted and so the way that I make work has had to adapt to that. Motherland, for which I received the Bright Spark award, was essentially the rather care-free meanderings of my wife and I in Russia. I couldn’t do that now. Projects take longer. I need to do more research. But at the same time, I’ve also become more focused. I have a much better sense of why I’m doing the work, of what it is I want to say and where I’m going than the early days of being a flâneur.

LBR. And finding a better balance between art and commerce?

SR. That’s the constant struggle. My one piece of advice to young photographers is: stay nimble. Isn’t it what financial advisers tell you: don’t put all your money in one basket. You have to do that within your career as well. 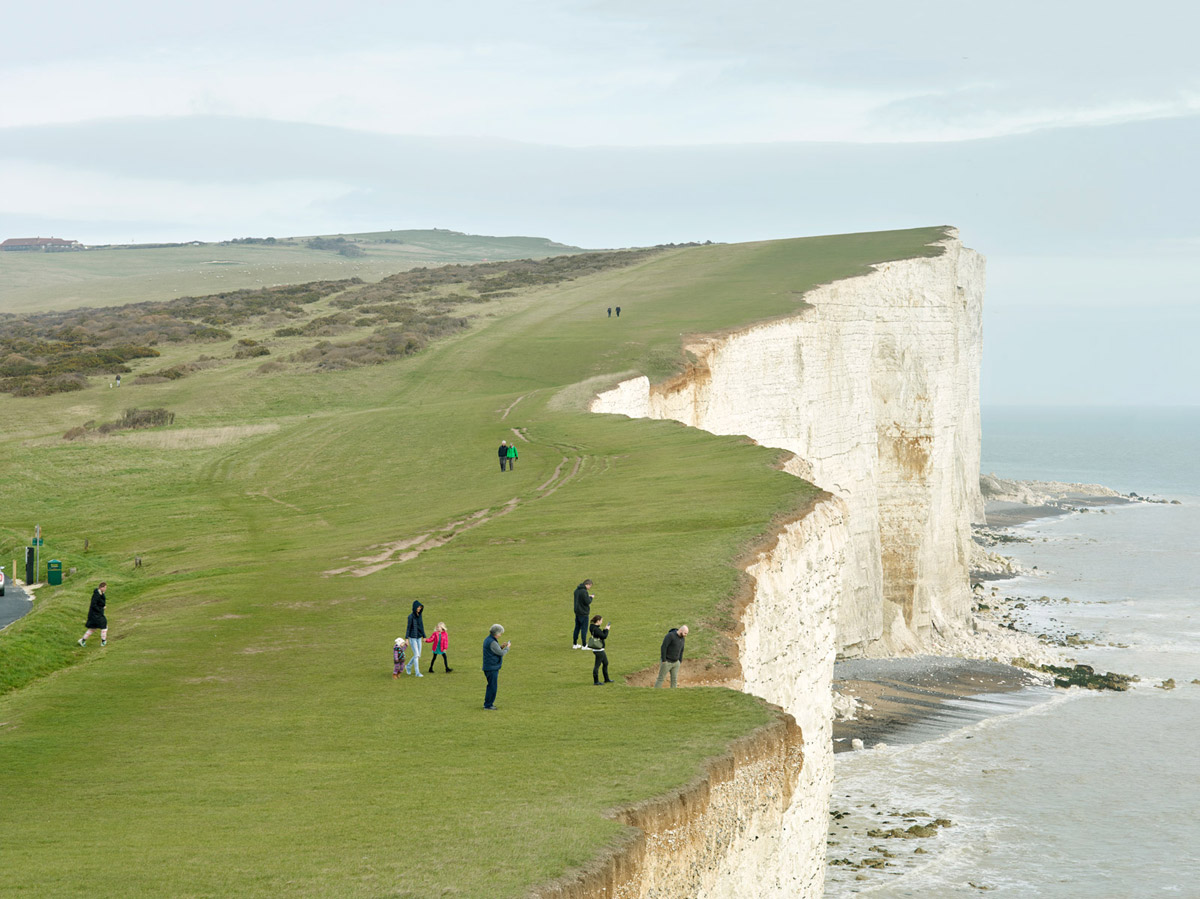 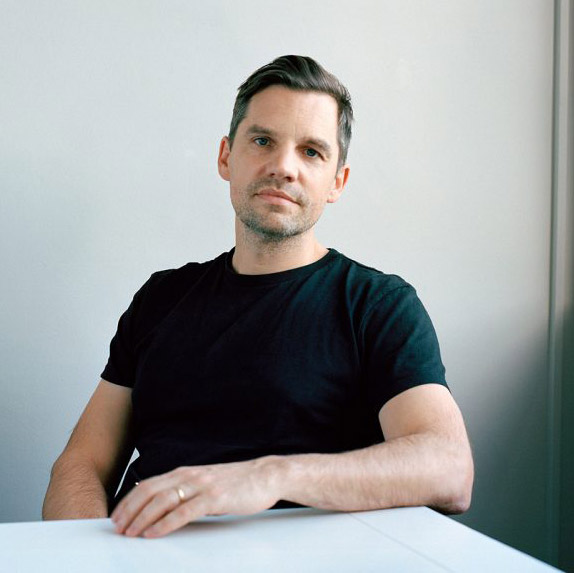 Simon Roberts (b.1974) is a British artist-photographer whose work deals with our relationship to landscape and notions of identity and belonging. An Honorary Fellow of the Royal Photographic Society,  he has published four critically acclaimed monographs, Motherland, We English, Pierdom and most recently Merrie Albion.