In conversation with Maya Fuhr

Soft hues. A flare for the absurd. A sophisticated kitsch aesthetic. Maya Fuhr, the 28-year-old who grew up in Victoria, Canada and now calls Toronto home, doesn’t take herself too seriously. Rather, as she explained during a recent conversation, she strives to find the comical in everything. Or almost. She’s passionate about the environment and photography, though the two don’t always go hand in hand, especially when it comes to fashion. And so, she doesn’t shy away from playfully biting the hand that feeds her through her personal endeavours. Last year, her series, Malleable Privilege, which, in the words of curator Ariella Starkman “considers the impact of consumerism, the use of clothing as armour and the way the two converge in the development of personal expression” caught the eyes of the Flash Forward judges, who awarded her the Project Grant. Since then, she’s kept busy and is preparing an exhibition of new work for the Fall.

Laurence Butet-Roch. If you had to summarise the past year to a few words, projects or milestones. What would they be?

Maya Fuhr. I’ve continued developing Malleable Privilege which is dissecting the work I do within the fashion world and exploring its impact on the environment. It’s all very tongue-in-cheek. Since I’m part of the industry, it would be wrong of me to stand on some moral high grounds and be preachy. Rather, I’m taking a humorous approach at how I make a living. Some of the memorable jobs I’ve had this year include: shooting for Marc Jacobs in Las Vegas, for Warner Bros who came out with a line of purses, Lactacia for Paper Magazine, Numero China, an editorial for a new sustainable fashion magazine called Damn Joan, and the more recent Converse campaign. I also got to take portraits of DJ Nina Kravitz for Interview Magazine.

When I’m not shooting commercial work or doing an artist residency –I did one at Gibraltrar Point on Toronto Island and at Palazzo Monti in Brescia, Italy–, then I’m in my studio more or less three days a week. I’ve given myself a deadline of October to unveil what I’ve done with the award. I’ll work with my curator Umair Diwan over the summer. Mostly, I’ve been experimenting with ceramics and collaborating with a Montreal 3D artist who can make 3D renders of my photographs. The idea with these is to turn the images into something malleable, for you to be able to actually touch the fabrics that are in them. 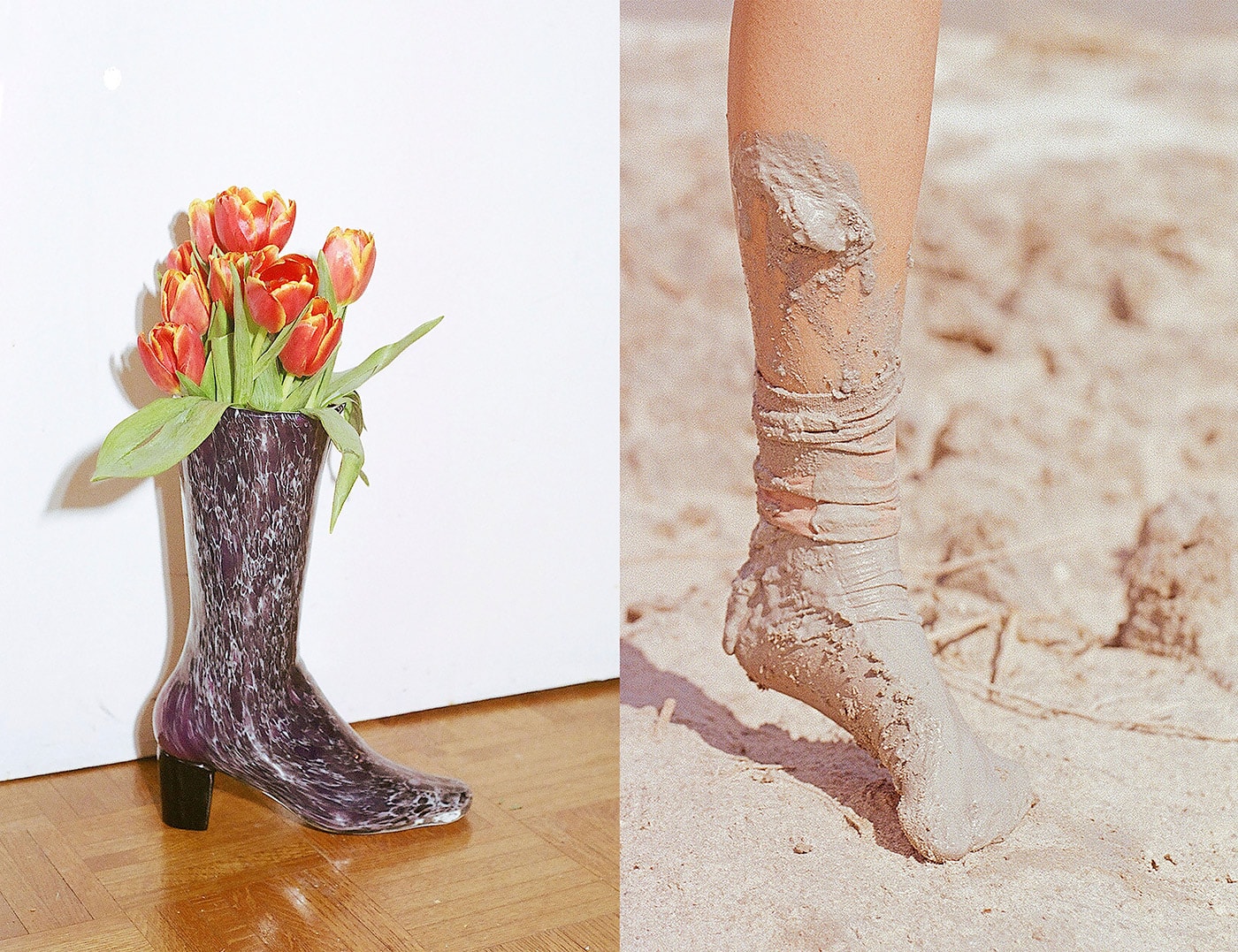 LBR. What drives you to make these personal pieces and experiment with different techniques?

MF. I work in the fashion industry and make a good living off of it, but I have this undertone of scepticism about the world I’ve created for myself. The way I express the moral quandary that sometimes I find myself in, is by spending time curating an exhibition where I can share that inquisitive side of myself, and the fact that I don’t support the idea of fast fashion, trends and the like. If I didn’t do that, if I didn’t have that outlet, I fear I’d get overwhelmed by the fashion industry.  I’m really privileged to share my experience from these high end shoots. Even just by being involved in the fashion-y community, I have a voice that most people don’t have access to. However, I want to express myself in the reality of my day-to-day. I personally rarely buy into fast fashion, it’s difficult to catch its speed and I hope its run in a different way in the future. 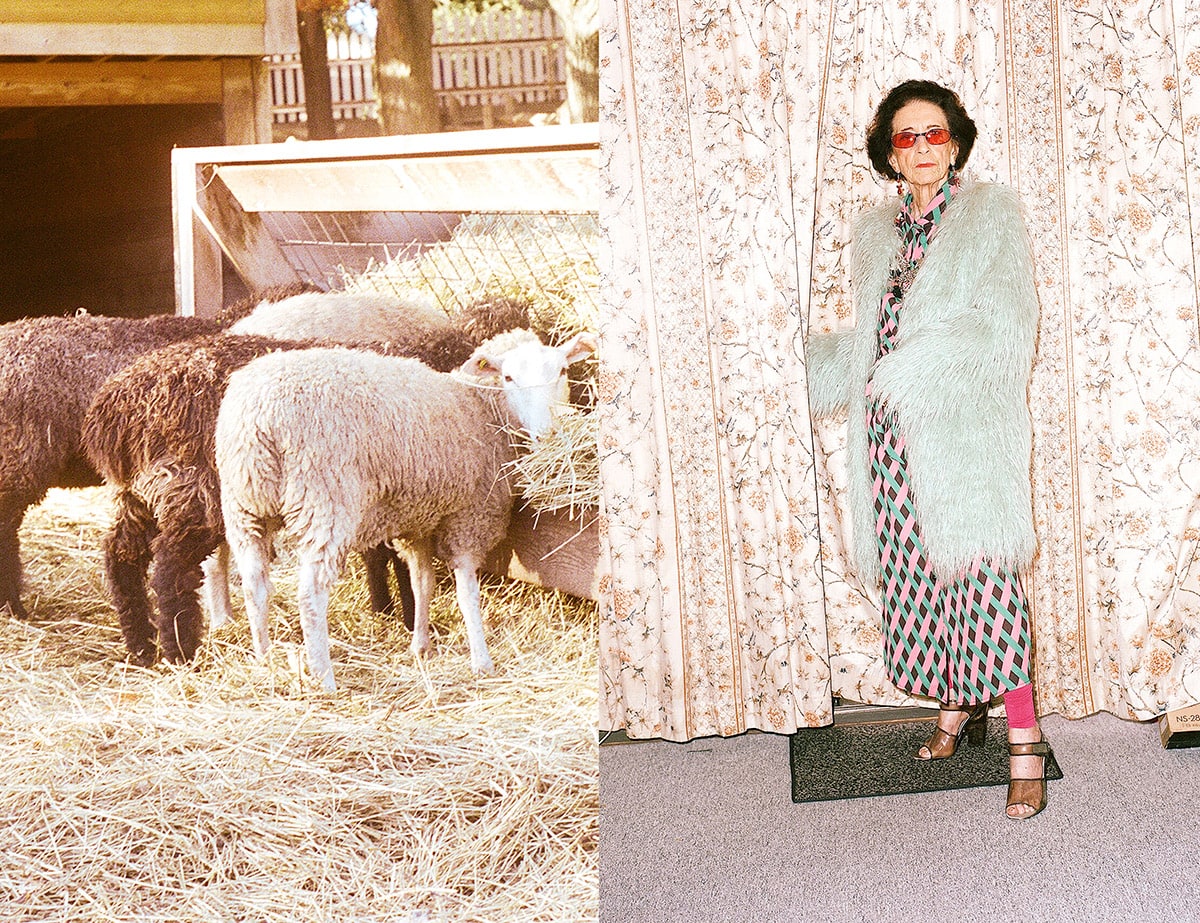 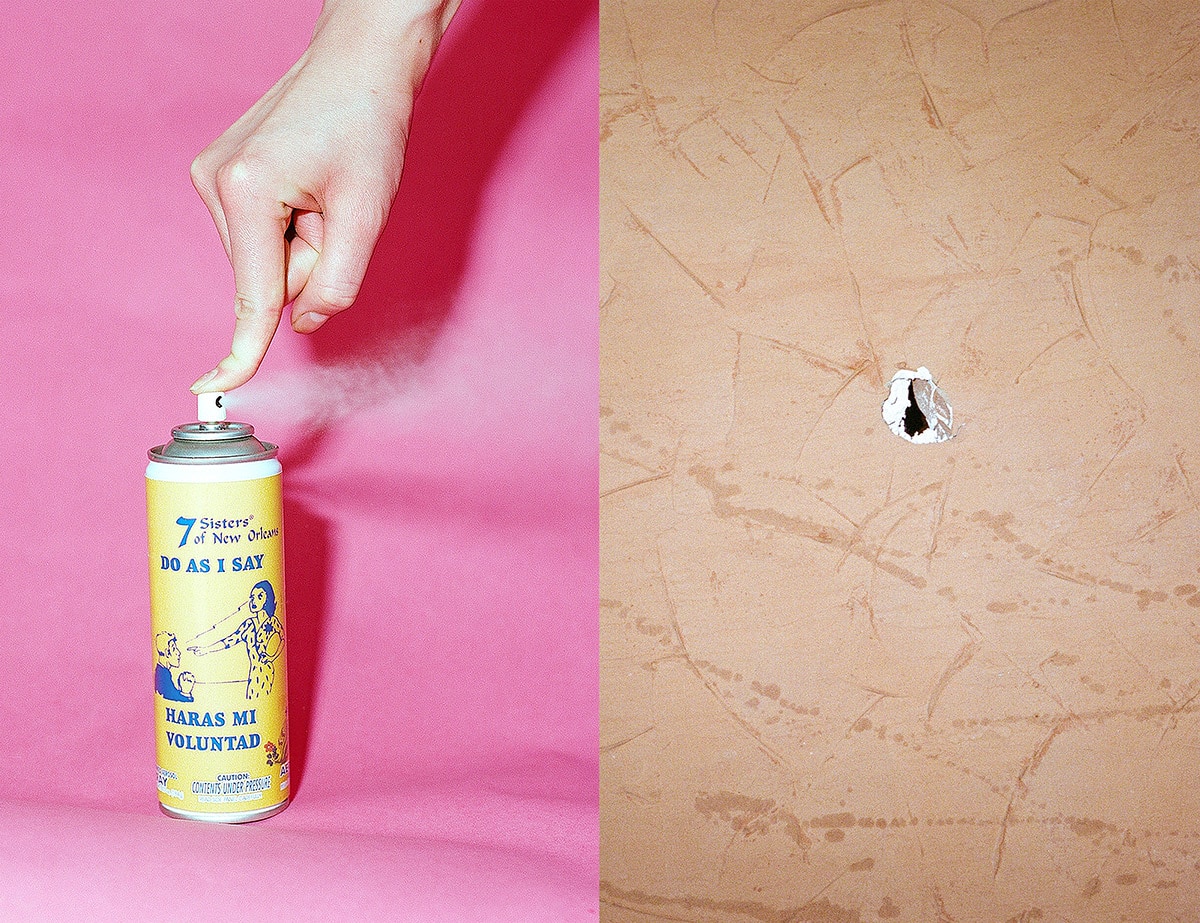 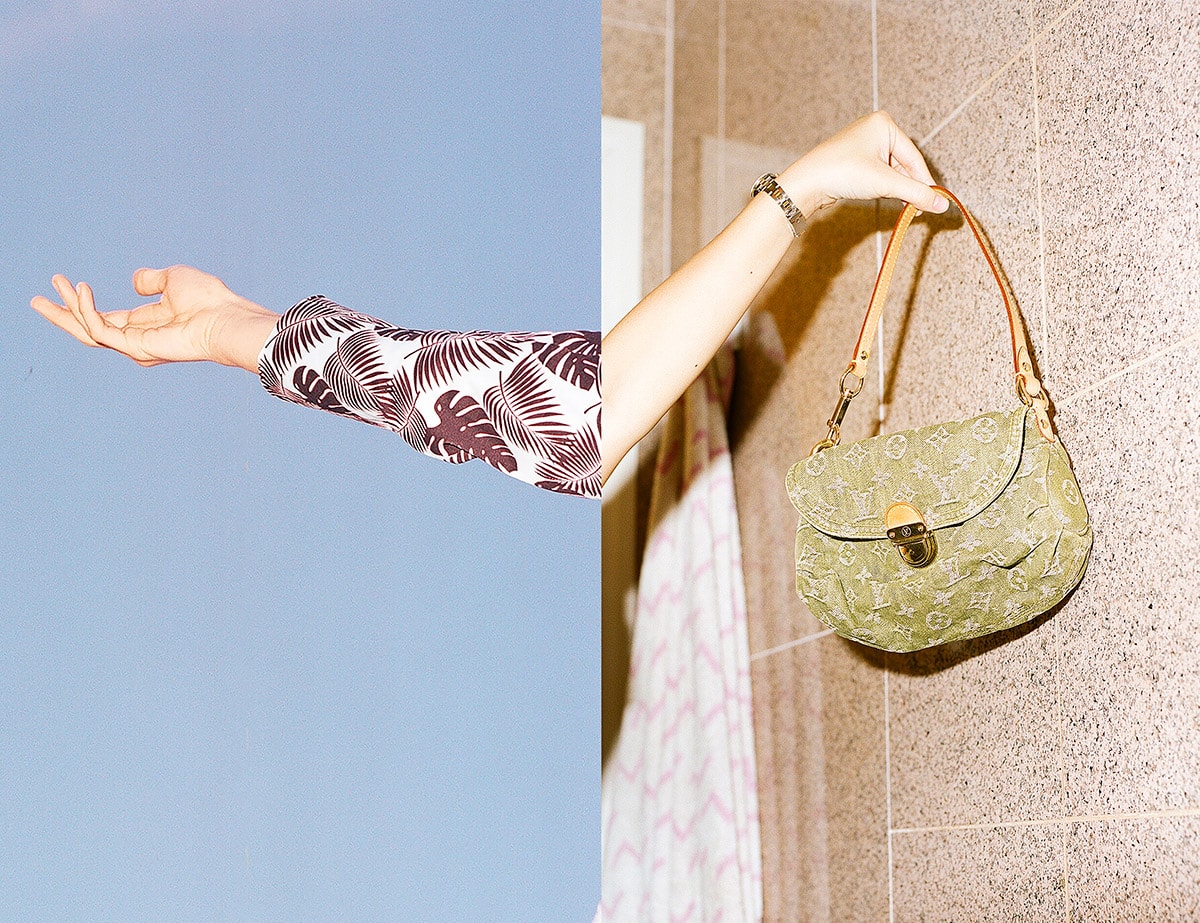 LBR. Where does your feelings of guilt come from?

MF.  My mom and sister have dedicated a big part of their lives to sustainability.  They design clothes and run an eco-friendly clothing store in Vancouver. Growing up, we were never encouraged to shop at the big department stores. Still, to this day, most of my clothes are secondhand.  I prefer the aesthetic and don’t enjoy wasting new clothes. With huge name brands, the clothes that don’t get sold often end up getting burned rather than donated to people who need them. And, not to mention the process of making the garments itself, which is unfair to the workers and pollutes the environment. I believe that we should own quality basics and timeless pieces paired with vintage, rather than give into seasonable trends.  That way we’d avoid mass production and consumption.

The work that I do, taking photographs of these high-end clothes definitely contributes to creating those trends. That’s why it’s kind of a guilty pleasure and I likely seem like a hypocrite.

LBR. Given your upbringing and beliefs, how did you get involved with the fashion industry?

MF.  It found me. I didn’t seek it out. When I started photography, I was simply taking pictures of my friends and documenting my life. I made a series called Garbage Girls about young women in their early twenties who are very messy, almost hoarders. It got a lot of attention. Without knowing it or doing it deliberately, it turned out that my aesthetic paralleled some of the changes that were taking place in the fashion world. Models went from being posed and looking unattainable to being the “cool girl-next-door”, comfortable, relaxed and a little edgy. Like my friends. 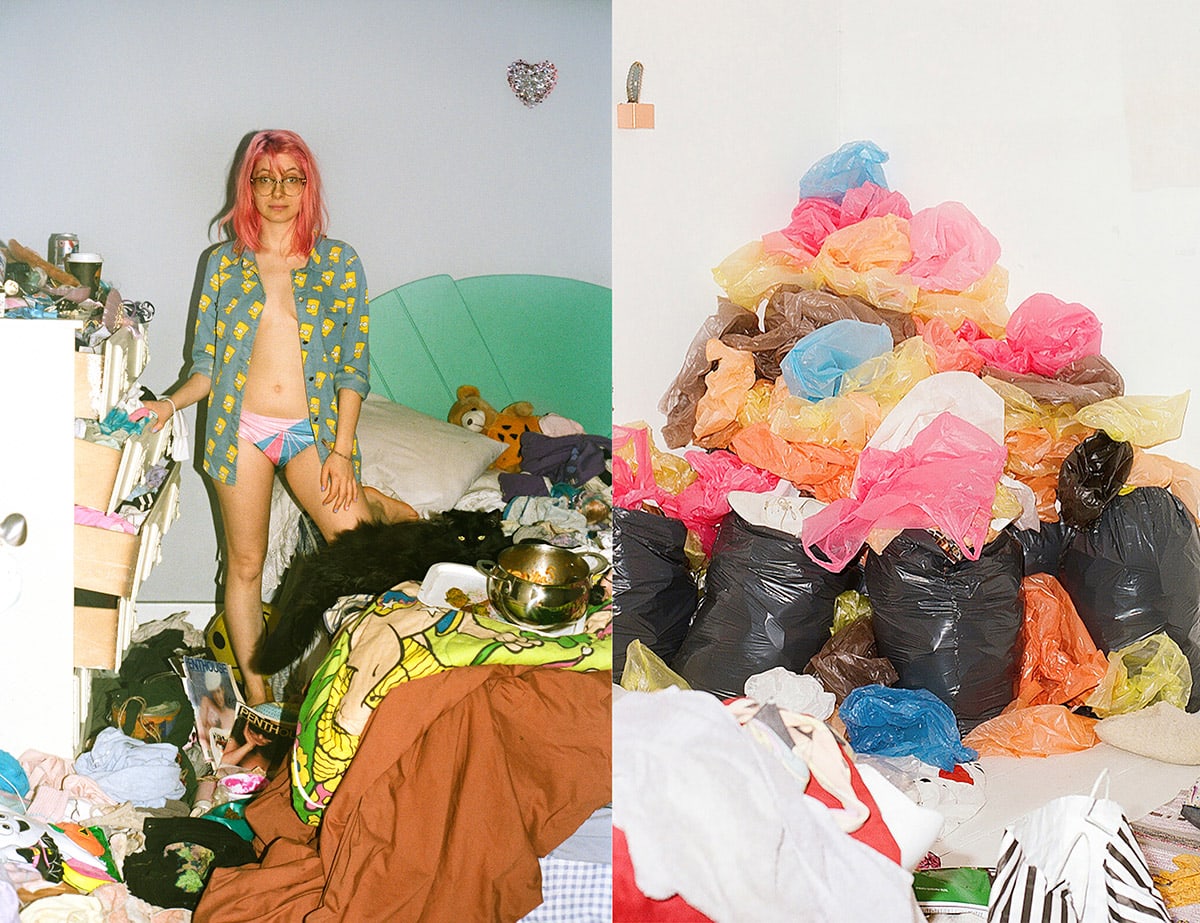 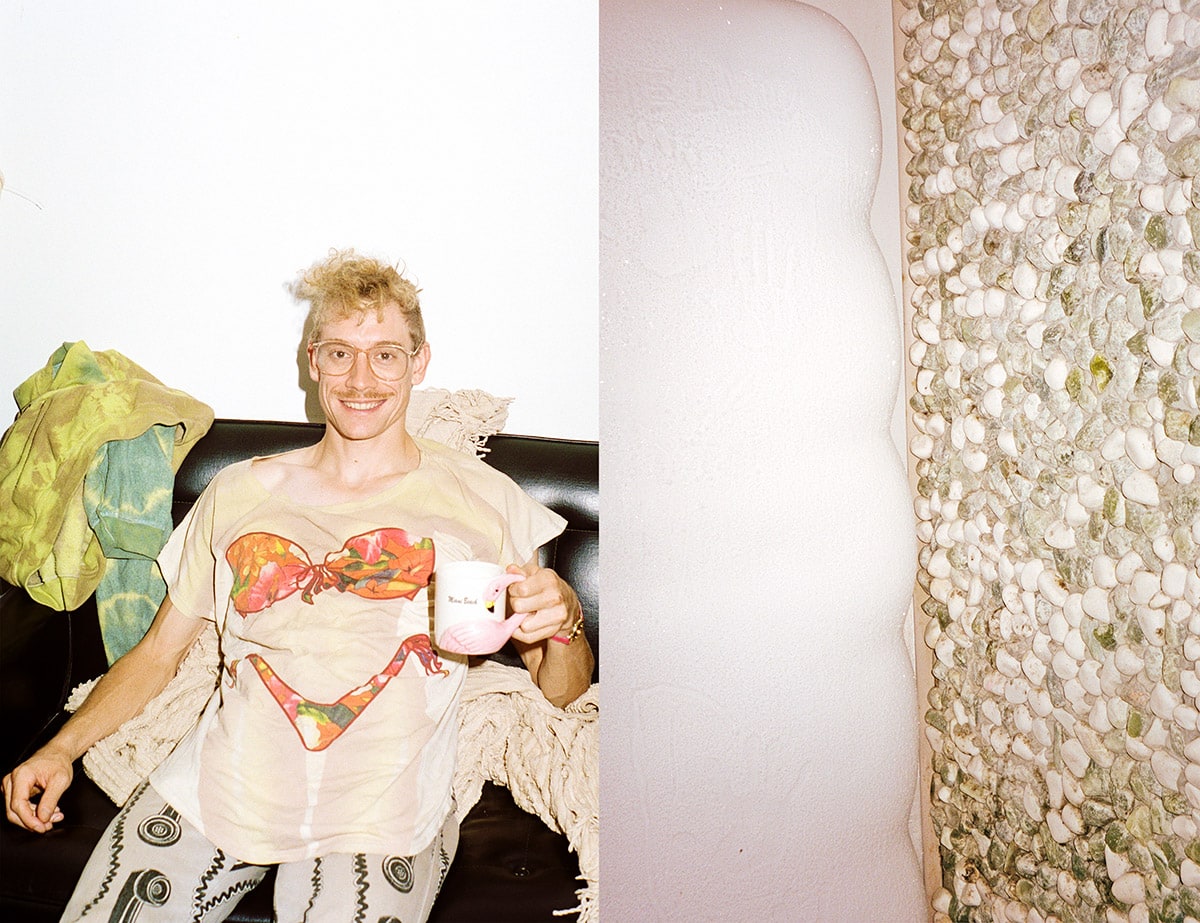 LBR. This duality makes me think of Dr. Jekyll and Mr. Hyde; how do you reconcile your two sides? Your work in fashion and your personal view on environmentalism?

MF. Seeing both sides means that the work I present in Malleable Privilege isn’t preachy. It’s inviting people to go through the thought-process I’m going through. I want them to start thinking about clothing and what it means to them, how it makes them feel, what they buy into when they buy into a trend, how advertising affects them, etc. I want to encourage them to deconstruct what they’re wearing. What’s the fabric? How was it made? Who made it? And so on.

As an artist, what I’m trying accomplish in my work, is allowing people to step into my world and out of their own comfort zone. So, I’m also hoping that people will see that I’m not this fashion photographer walking around in these extravagant, disposable outfits–which is how people who’ve never met me might think I am based on how I make a living and my social media presence.

LBR. How as your approach evolved over the years?

MF. When I first started working in fashion, a lot of my artistic energy was going into it.  Eventually, I realized that I couldn’t rely on only that work to feel complete. Now, while the fashion shoots I do still have my aesthetic and personal touch, I pour a lot of my creative energy in my art pieces and exhibitions. They are my truth.  With that being said, I think at the moment I’m enjoying the perfect balance of both worlds.

LBR. Speaking of creative energy, where do you recharge yours?

MF. Both in solitude and in my relationships. This is when I have the time to look at the fashion work I’ve done and process it, manipulate it, or turn it into clay sculptures.  Also – traveling, listening to good music (Molly Nilsson is good for recharging), dancing, going to galleries, meditating.

Maya Fuhr has produced engaging yet elusive images over the past 10 years. She currently lives and works in Toronto and New York. Maya’s work can be found in private collections both in Canada and the United States and has been shown in exhibitions worldwide; showing at galleries in Paris, New York, Tel Aviv and Toronto. Her best known exhibitions have been “Lemonless” at the AGO Art Gallery of Ontario and “Garbage Girls” at Artemisia in Tel Aviv.